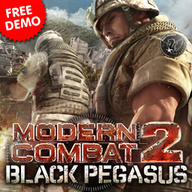 Discover a top-notch 2D scrolling shooter featuring over-the-top action and immersive graphical effects and animations. Fight your enemies in 11 levels around the world with a full arsenal. The exciting gameplay combines combat and squad-based cooperation. Take advantage of the new and extremely efficient cover system to fight enemies with the help of your teammate. The game lets you live multiple game experiences like avoiding helicopters and chasing down villains.

For all other issues, please go to support.ovi.com


Here are the most popular items that are similar to Modern Combat 2 Demo:
RA.ONE GENESIS
Actionby: Indiagames Ltd.Description‘Ra.One Genesis‘ is an 2D action packed adventure mobile game where you play as ‘G.One’ the superhero with supernatural powers who will fight his way through RA.One’s army of minions. Your goal is to find and destroy Ra.One’s ‘H.A.R.T’ before he gains endless energy and brings fort h his indestructible wrath over our existence. Unleash your supernatural abilities to sabotage enemy locations, evade their traps and surveillance systems and to take down enemies in different ways.FreeGangstar Rio Demo
Actionby: Gameloft SADescriptionFor the first time ever in a sandbox game, you can explore the fascinating and dangerous city of Rio de Janeiro. Strike back at those who tried to kill you and left you for dead. With a new face and new reason to live, you’ll infiltrate your former gang and find out who needs to pay. With countless thrilling missions to play plus new weapons and vehicles like a jetpack and tank, you’ll become totally immersed in the gang life of Brazil’s most notorious city.FreeLethal Mission Lite
Actionby: InodeDescriptionYou are secret agent Johnson and it is your turn to try to stop Dr. Muerte. After everything else has failed, you are the only hope now. Go through many levels of thrill and adventure to try to stop Dr. Muerte from releasing a terrible biological weapon. Infiltrate your enemy lines; discover the horrible secret that keeps this evil organization running. Careful who you trust!FreeSexy Santa
Actionby: East InnovationsDescription"Sexy Santa" is feeling naughty and he has to grab numerous gifts to present to HOT BEAUTIES and SEXY Babes.
Nice game for getting in the romantic mood.
Sexy Party with Sexy Santa!!FreeMicrocopter!
Actionby: AMA Ltd.DescriptionPilot a small radio-controlled helicopter! Manoeuvre the helicopter through all parts of the house and pick up objects with your winch!

This content has a time-based free trial which provides the user with free access to the content for a limited time period.FreeAgneepath
Actionby: Indiagames Ltd.DescriptionPlay as Vijay Dinanath Chauhan and take revenge from Kancha for framing your father and getting him lynched by the villagers of Mandwa. Based on the movie Agneepath this action packed 2D side scrolling mobile game features 4 exciting levels of progressive difficulty.FreeSubcultures Fight
Actionby: MobstudioDescriptionGuys in this city try to find out who's cooler. Punks against lads, emos against rappers, geeks against football fans. Even anime girls fight against soldiers. Choose your enemy and beat him! Fight!FreeAssassin’s Creed® Revelations
Actionby: Gameloft SADescriptionPlay as Ezio and Altaïr at two different times in Constantinople’s great history and uncover the ultimate secrets of the Assassins’ Brotherhood. Eliminate plenty of dangerous enemies thanks to a wide range of assassination moves and tricks. Recruit assassins, and send them on missions so that they can gain experience to help you throughout the game, and use Da Vinci’s legendary flying machine in thrilling top-down levels.FreeFatal Attack
Actionby: Indiagames Ltd.DescriptionGorgeous graphics and unique war gaming experience! This is a story about a new private soldier Levy who encounters sudden attack from private forces when he convoys nuclear scientist Helen for duty. Helen was taken. To rescue Helen, Levy chases and penetrates into the enemy’s battalion alone. But with an incredible doubt being resolved, Levy hardly believes the terrible reality. The battle gets more and more complicated and confusing...FreeCrazy Cats
Actionby: Pixalon StudiosDescriptionHello. Meet Bark the Dog and join him on his adventure quest to discover the secret of nine cat lives in the fantasy land of Crazy Cats. Let Bark rotate the game screen in real time, which makes some of the cats fall down and easy to scare away with barking. Swim in water, slide on the ice or float in low gravity - the game environments never get boring.FreeJallikattu
Actionby: NextwaveDescriptionJallikattu 'Or Tame the Bull' is a popular harvest sport in Tamil Nadu. It is also one of the oldest living sport still practiced. As in the real game try to capture the bull and hang on to it as long as possible.FreeBank Robber - Free
Actionby: LunagamesDescriptionBank Robber with Facebook (optional) Friends.

The Bank is guarded by a sleepy officer. Time to see how many gold pieces you can rob from the bank in 60 seconds.

Note: Facebook connection is optional and no Facebook App is required. This App is sponsored by ads.

Get your FREE copy today!Free 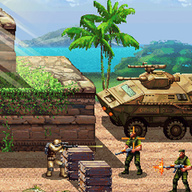 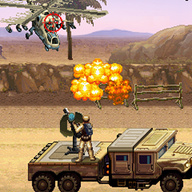