 Summary: Jump into the Cold War’s most terrible conflicts in this exciting and over-the-top shooter game. Enjoy fast-paced action and stunning graphics 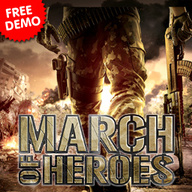 Jump into the Cold War’s most terrible conflicts in this exciting and over-the-top shooter game. Enjoy fast-paced action and stunning graphics through 9 chapters set across the globe from Vietnam and Saigon to the Afghan mountains. Play as two special ops soldiers and take down enemies with a large arsenal of spectacular weapons like a grenade launcher or a flamethrower. Experience a variety of gameplay like a helicopter airstrike, stealth sequences and even an underwater level.

For all other issues, please go to support.ovi.com


Users who downloaded March of Heroes Demo also downloaded:
Fatal Attack
Actionby: Indiagames Ltd.DescriptionGorgeous graphics and unique war gaming experience! This is a story about a new private soldier Levy who encounters sudden attack from private forces when he convoys nuclear scientist Helen for duty. Helen was taken. To rescue Helen, Levy chases and penetrates into the enemy’s battalion alone. But with an incredible doubt being resolved, Levy hardly believes the terrible reality. The battle gets more and more complicated and confusing...FreeAssassin’s Creed® Revelations
Actionby: Gameloft SADescriptionPlay as Ezio and Altaïr at two different times in Constantinople’s great history and uncover the ultimate secrets of the Assassins’ Brotherhood. Eliminate plenty of dangerous enemies thanks to a wide range of assassination moves and tricks. Recruit assassins, and send them on missions so that they can gain experience to help you throughout the game, and use Da Vinci’s legendary flying machine in thrilling top-down levels.FreeFast & Furious 5 Demo
Sportsby: Gameloft SADescriptionThe explosive franchise built on speed is back with Fast & Furious Five and this model comes fully loaded! Play as Brian O'Conner on the opposite side of the law and assemble an elite team of top racers. Get behind the wheel of your dream car to battle opponents in the ultimate high-stakes racing game that follows the movie storyline.FreeBorderWar Face Off
Actionby: Jump GamesDescriptionThe war has begun and your country needs you. Play as a courageous soldier defending our borders from an enemy invasion in this action packed game. Keep your aim sharp and take down the enemy insurgents. It’s time to teach the enemy that one of us is more than enough for an entire army of theirs!FreeModern Combat 2 Demo
Actionby: Gameloft SADescriptionDiscover a top-notch 2D scrolling shooter featuring over-the-top action and immersive graphical effects and animations. Fight your enemies in 11 levels around the world with a full arsenal. The exciting gameplay combines combat and squad-based cooperation. Take advantage of the new and extremely efficient cover system to fight enemies with the help of your teammate. The game lets you live multiple game experiences like avoiding helicopters and chasing down villains.FreeDriver San Francisco Demo
Sportsby: Gameloft SADescription"With crime lord Jericho now on the loose, San Francisco faces a terrible threat. Only one man can stand against him. You are Tanner, a hardened detective who, from behind the wheel of his Dodge Challenger, is involved in a relentless manhunt throughout the City by the Bay.
Driver San Francisco is the return of the popular action driving video game series.FreeUP
Adventureby: Indiagames Ltd.DescriptionJump aboard a high flying adventure based on Disney Pixars summer film UP. Navigate Carls balloon tethered home against forceful winds and numerous obstacles. Play 12 exotic levels on a thrilling, balloon filled journey to Paradise Falls.FreeFacebook
Social networksby: FacebookDescriptionShare and stay connected with your friends with the new Facebook app. Facebook makes it easy to stay connected and share with friends. Share status updates, exchange messages with your friends, check out your news feed, review your upcoming events, look at your friends’ walls and user info, upload photos, and much more!FreeTurok
Actionby: Indiagames Ltd.DescriptionWhiskey Companys ship was shot down to an uncharted planet.Turok and his men must gather their forces and survive.Hunted by evil war criminal Kane and his mercenary army they have to fight their way back off the Planet.Tough battles await Joseph Turok,member of the elite Whiskey Company squad,on a mission to take down the war criminal Kane on a genetically altered planet.He fights an army of well trained soldiers,and the ravenous,unpredictable dinosaurs that populate the dangerous environment.FreeAdventure of Ted
Adventureby: DreamGamezDescriptionJump, run and kick your enemies out of your way. Save Ted from enemies and help him to get to his home in this cute game.

Like us on Facebook: facebook.com/DreamGamezFreeLion King
Adventureby: Indiagames Ltd.DescriptionHelp Simba reclaim his title as King by escaping the hyenas and facing the challenges of the Pride Lands Begin at the foothills of the mountain and make your way to the top Jump over ledges stones and avoid dangerous obstacles such as bees raging fires and hyenas. Collect stars and other items to help Simba on his journey.FreeNinjaStrike
Arcadeby: Jump GamesDescriptionA fun and casual game where you run up the walls jumping from side to side to avoid the obstacles and to kill the enemies. Face some of the craziest enemies. Kill 3 enemies of the same type to get some wacky power-ups! With just one button, this will be the simplest yet fun game you'll ever play.Free 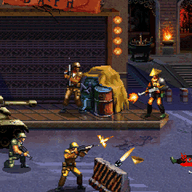 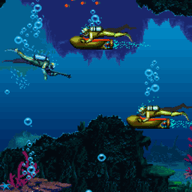