 Summary: A screensaver for Series 60 2nd and 3th edition phones, licensed under GPL. After installing the package, it can be selected and enabled in the themes application on the phone. 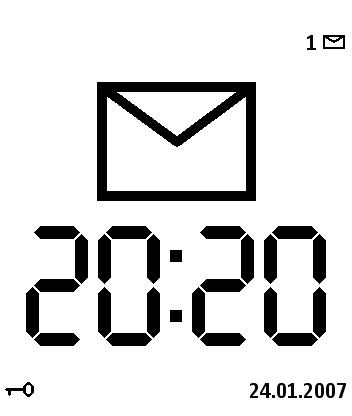 A screensaver for Series 60 2nd and 3th edition phones, licensed under GPL. After installing the package, it can be selected and enabled in the themes application on the phone.

Note, if upgrading from a version signed using Open Signed Online, you'll have to uninstall the old version before installing the new officially signed one. There's no direct need to upgrade currently, though, since they're functionally equivalent.

The feature to turn off the unused parts of the screen doesn't seem to work on some older Series 60 3rd edition phones. Thus, the screensaver might use very much power. Exactly how much it affects the battery life is not known, though.

On some phones, however, the screen actually is powered down, but it seems to only keep a narrow area active (about as large as the default screensaver), no matter how large area the screensaver reports as being in use. The workaround is to manually turn off power saving for the screensaver in the settings.

Phones without a memory card may have problems where the default screensaver is used instead of the manually chosen one. Inserting a memory card seems to fix this problem. This is probably a bug in the phone firmware.

When upgrading, try restarting the phone if the new version doesn't seem to come into use. This could happen if the screensaver server has the old code loaded into memory and doesn't notice to load the newer version. Selecting another screensaver and doing a preview of it before upgrading might help.